A Date With God 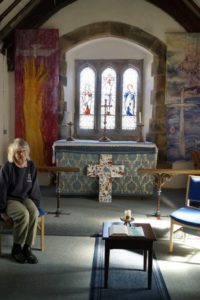 Let’s face it, God has had some very bad PR. Interpretations of the Holy Books haven’t helped. According to the Old Testament, God’s fond of mass
genocide (Noah’s Ark), destruction of idolators (Exodus, Kings), flattening of cities (Sodom and Gomorrah in Genesis) and sundry other atrocities. Even worse, we’ve got that Old Man In The Sky Watching Us image from Christian art. Consider the Sistine Chapel…

But here’s a thought—what if God is exactly what we think God is? That’s the way many modern mystics interpret the Bible nowadays: that God reflects the state of mind of humanity at the time. The ‘real’ God is Divinity in our own hearts but the ‘oppressor’ God is a projection of our own fears and hatreds.

So how are we doing with the God Thing nowadays? Basically, a lot of us are confused. Apart from anything else, we have political correctness and there are serious gender issues around God. Is God a She? A He? An It? So what’s to do?

Try going out on a date with God to find out for yourself.

No, I’m not joking. It’s fun. If we believe (which most of us do) that our good comes from God, then making friends with God is only going to help. It doesn’t affect God whether we love Him/Her/It or not—whatever God is, is stable—in the words of C. S. Lewis ‘prayer doesn’t change God; prayer changes me.’ And all of life is a prayer. Every thought we think is a prayer—a request for joy or pain.

So, back to the date with God. Be warned up front that you may have to pay because God’s a bit like the British Royal Family in that that He doesn’t carry cash but you’ll get the money back later—promise. And you’ll get some pretty amazing other prosperity too.

Here’s a story of one of my dates with God:

I was heading for London on the train for a day of business meetings. Every single meeting got cancelled as soon as I arrived. I had choices: I could go straight home—or I could spend a day being free in a big city in a smart business suit. I knew I needed a holiday and I had been fussing about not having enough time for one, so I swallowed the guilt and decided that this was as good a time as any for focusing on prayer. For once, I would allow God to be in charge of my life. I would go where He wanted me to go and do what he wanted me to do.

So I asked God to take me out for the day.

We met up at Euston Square tube station and he offered to buy me some lilies from the flower stall outside but I declined as I didn’t want to carry them around with me all day. I worried a bit about that—was I turning down prosperity? God said I shouldn’t worry about it; frankly I shouldn’t really worry at all…

We took the tube into the centre of London and I asked God to draw my attention to an advertisement to tell me where we were going on our date. That was quite easy because I assumed that it would be something like a lunchtime concert at St. Martin in the Fields at Trafalgar Square.

The first advertisement I saw was for the Victoria and Albert Museum. Resistance set in at once—it was a long way away; not at all spiritual; probably rather boring—and suddenly I wanted to go shopping… ‘We’re going to the museum,’ said God. ‘Trust me, you’ll like it.’ Trust God? What an interesting concept.

On the way, God had a go at disconnecting my ego consciousness by suggesting that I looked at the people in the tube train carriage in a different way. ‘Let me look through your eyes and tell you what I think,’ He said (God’s only a He in this story because I’m a girl by the way). So I did—and I got a completely different perspective on several people whom I would have judged automatically. Interestingly, no one except God sat next to me all the way to South Kensington…

We got to the museum and went in by the entrance that has a lot of crockery from the Middle Ages from all around the world. I really am not a fan of crockery but, do you know what? God and I looked at two blue and white plates for a whole 20 minutes. Every time I tried to move on I saw another fascinating image in the glaze. I looked for beauty instead of passing by on the other side—and I found it. I thought about the people who had made the plates and God told me how much He had enjoyed making the plates with them. I became a part of how their hands had moved; how different their pictures were; how they might have reflected their lives; where they lived; what kind of lifestyle; how they painted; what they used for colour; what their workplace, if any, was like. After two hours, God and I were about a quarter of the way down the gallery.

‘Why do you want to get round the museum?’

‘Well, to see everything.’

‘You won’t see anything, Maggy,’ said God. ‘You’ll just scan and move on.’

We had a brief argument at that point because my persona wanted to disagree with this unpalatable truth—and it had had enough of blue and white plates. After five spirited minutes (fortunately with no one else in the gallery at the time), we came to the resolution that we would move on—but that I was to signal one thing in each gallery that I was willing to look at with God’s eyes.

I have never seen so much beauty, craft or delicacy. I have never had so much fun in a museum. I saw things that I never would have noticed alone and thought thoughts I’d never thought before. God and I even told each other jokes in the Roman section while we were having a sit down and a muse. God knows all the best old jokes and, apparently, they’re even better after a couple of hundred years of rest.

At 3pm I was tired. ‘Shall we go somewhere else?’ said God.

Oh boy, the resistance! It was miles away; too expensive; I didn’t want to have that much to eat; I didn’t want to sit on my own in a restaurant—especially without a book or a magazine. It was simply not on. But we went to Fortnum’s—God does a neat job of temptation sometimes, promising me that we could just go and look and, if it was too scary, buy some chocolate instead.

The restaurant at Fortnum’s is on the top floor and it is very elegant. You can have a full afternoon tea for about £25, with enough food for a small army with very delicate manners. I truly didn’t want that much but there was always the possibility that they’d let me just have a cup of tea and a cake. In through the swing doors I went—and straight out again. The room was full of suave-looking people in groups, enjoying themselves and it felt really intimidating.

‘Stop!’ said God, as I was half-way down the stairs. I stopped, reluctantly. ‘What’s the matter?’

You’re not alone,’ said God patiently. ‘You’re with Me.’

You know when there’s a turning point in life? That was one of them for me. Did I want to believe what I was experiencing or to turn away from all this fun and abundance because I was embarrassed?

We went in together, God and I, and there was a little table with two armchairs free. The waiter was charming and sat me down there and brought tea and two tiny, exquisite cakes. And I sat there, to all intents and purposes entirely alone, dealing with all the suppositions that I had inside me about middle-aged women alone in restaurants. And after I’d dealt with all the rubbish, I suppose I did a kind of sacred idleness meditation with chocolate cake. And it was fine. After all, nobody else there cared who I was or what I was doing there; it was only my stuff. And it was very nice cake.

God and I had a good chat during tea. I learnt a lot about self-esteem and not putting myself down and how I often used bravado instead of bravery and things like that. And we decided that we’d like to see each other again—soon.

Then it was time to pay so I paid—about £10, so not too expensive! And then I made my way to the station to take the train home to Worcestershire. God saw me onto the train and let me go with a kiss (I had a good book to read and I wanted some time on my own). I said no again to the lilies he offered me at the station because God didn’t have any cash and I’d spent my spare money on the tea. He promised he’d send them later.

As I took my ticket out to show to the inspector, the receipt for Fortnum’s came out of my bag too. I looked at it idly, preparing to scrunch it up to throw away. ‘Tea and cakes for two,’ it said. God had landed me with the bill for his tea!

But how amazing that the staff at Fortnum’s knew that I had had a companion sitting with me in their restaurant. I had not been alone for tea and cake just as God had promised me. And how lovely it was to come home to my husband Lion who greeted me with a big bunch of lilies. ‘I just got the urge to buy them,’ he said. Well, he would, wouldn’t he? Thank you God.