A Fool for God 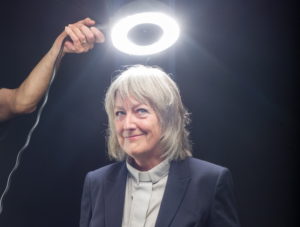 Photo by Steve Haywood from the Western Morning News after I reached the ‘Funny Women’ finals.

‘I could never do that.’

If you want to make God laugh, tell him your plans.

They say that chubby, shy kids are often funny to divert any criticism away from them. I was chubby and I was shy but I wasn’t funny. They say that journalists, like doctors, have a wicked sense of humor to keep them going through dealing with horror in other people’s lives. I was a journalist but I just felt sorry for everyone.

But when I was ordained, instead of everything becoming more serious, it all started being rather amusing.

That’s not really the kind of thing you want to advertise. A vocation and its fulfillment is the soul’s work. It is incredibly powerful and the actual ordination was breathtaking.

It wasn’t so much the fact that the windows were open and we could hear quite clearly two other friends who had also arrived late arguing about whether to come in or go and watch the football match at the pub (the pub won).

It wasn’t even the assistant minister setting fire to his sleeve when he lit the candles.

It was all about a deep, bubbling joy that rose up within me and kept trying to burst out in ripples of inexplicable laughter—as if the Angel of Mirth was holding me in her arms and laughing with joy.

Ancient traditions say that the Angel of Mirth is closest to the throne of God. Well, she was … until someone invented the whoopee cushion.

From then on, I seemed to have no choice but to bring a touch of lightness into everything I did—even funerals.

I’d been a funeral minister for three years before my ordination and I always found them terrifying. It is so important to get every fact correct, every nuance perfect. This is a human life being laid to rest with dignity and respect. What’s more, you get a very bad reputation very fast if you overrun the time set for you at a crematorium — no matter how late the funeral cortege may be.

Jerry Seinfeld once joked that a survey showed people’s number one fear is public speaking. Number two is death. That means, to the average person, that if you have to go to a funeral, you’re going to be happier in the casket than doing the eulogy.

Obviously I’m tactful but frequently families love the idea of sharing their departed loved-one’s favorite joke or funny story. There’s nothing like a rumble of appreciative chuckling to salve a sad situation.

If you do regularly have to speak in public while people are crying all about you, then making them laugh when they’ve got a drink in their hand might not come so very hard. But even so, that was the sum total of it for seven years. Until: ‘Have you ever thought about doing stand-up?’ said a man at a workshop I led on how to overcome the ego’s resistance.

All I’d been doing was telling them about my own resistance. It was certainly quite amusing but that was all.

‘I could never do that,’ I said with all the pompousness of someone who thinks they know what they’re doing in spiritual work.

Just two weeks later, I had seen British comedian, Sarah Millican, explaining how she went on a comedy course to regain her self-esteem during a divorce. I thought ‘I couldn’t possibly do that.’

But then, prompt number three came from a co-counselling friend. ‘You should do stand-up,’ he said. I know that when you get something in threes, God is hinting loudly. But what would the world think of an ordained minister making jokes in public? Especially jokes about God? Surely comedy was for the young? And how controversial would I dare to be?

Then of course I turned on the television to see Jackie Mason, the venerable Jewish comic, hitting the headlines with remarks that Jewish and black people were seeing more discrimination in their minds than in the outside world. Jackie was ordained as a rabbi before starting his comedy career.

So, tentatively, I looked on the Internet to see if anyone actually taught stand-up comedy within commuting distance.

Of course there was a five-week beginners’ course half a mile from my home starting in four weeks’ time. What was more, it was ridiculously affordable.

I was out of excuses.

I turned up apprehensively to find, just as I expected, that I was twice the age of the teacher, let alone any of the other six trainees. One young lady enquired of me, politely, ‘What are you doing here? You’re, like, old!’ She added, inconsequentially: ‘I don’t like old people.’

I told her she’d recover from that in time … and the others in the room laughed. That was surprising. What was also surprising, throughout the evening was that I was the only one who had funny stories to tell which weren’t about sex, relationships, food or how awful other people or the town we lived in were. Now jokes on those subjects can be very funny; but I was definitely something different. Even on the training, I found that I was stripping down their views (and prejudices) about God and spiritual people while simultaneously making them laugh. 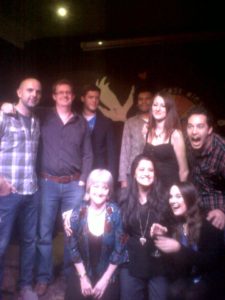 The folk from the Birmingham comedy course.

Five weeks later, the six of us had our first comedy showcase on a Sunday night in the middle of Birmingham. When you’re up on stage you often can’t hear your audience so I had no idea whether my set was working. But at the end—tumultuous applause and, within my heart, a knowing that this was what God wanted from me—joy. A cup overflowing with laughter. Within days, to my shock and amazement, I was getting bookings to perform all around the city.

The inspiration for jokes seems to come through whenever I ask. I get the seed but then it’s my job to hone it and hone it so that it’s sharp and succinct. I am still amazed at what is happening but the great ‘Oh you idiot—you asked for this!’ moment came when I finally realised that I had placed a picture of Thalia, the Muse of Comedy, on my wall just a year before. I’m an author of books on Bible metaphysics and history and had had a picture of Calliope, Muse of the epic saga, framed and hung to inspire inspiration. But I also wanted my books to be easy to read and filled with light touches, so I had framed Thalia as well. She is still there, smiling directly into my eyes every time I look up from my desk while Calliope is looking away.

Nowadays I travel all around Britain performing in pubs, clubs, at galas and spiritual events and I know this is a mission. Each laugh is shaking out stuck debris, unhelpful beliefs and prejudices. The comedy can dissolve the sacred cows of religion and lift hearts and open eyes. It can draw laughter from deep within the sacred and dissolve the profane. It can reveal God in a way that this new, secular, busy world can hear and appreciate. To do this work is an incredible privilege.

Yes, some people have said that I am bringing the clergy into disrepute. Others have said I’ve sold my soul for a cheap laugh. Those kind of remarks are always challenging; always make me think again and challenge myself. 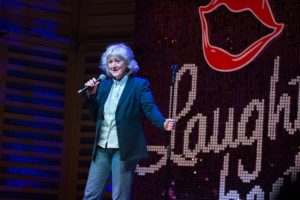 But the truth is I never stand up alone. Inspiration stands with me and speaks through me when I falter or am heckled. I’d never have chosen this consciously but I am so very glad it chose me.

If you want to make God laugh, tell him your plans.

Or there’s always the one about Jesus and slice of toast. He likes that one a lot.