The Four Faces of Jesus. 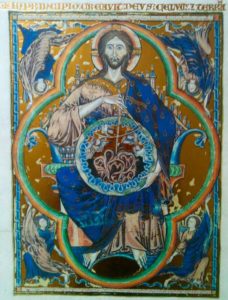 One of the great theological debates about the New Testament is ‘why four gospels?’ We know that many more were written, including the famous Nag Hammadi scripts with writings by the disciples Philip and Thomas and even one accredited to Mary Magdalene. These were Gnostic gospels which had a very different ‘take’ on the world – believing in the idea of ‘external evil’ as opposed to the ‘all creation is good’ teachings of Genesis and of Jesus’ time.

It is very unlikely that the four Gospels selected for the New Testament were picked at random. There had to be a rhyme and reason – and something that would be useful for us to understand today.

The Gospels could not possibly be either more or less in number than they are. Since there are four zones of the world in which we live, and four principal winds, while the Church is spread over all the earth, and the pillar and foundation of the Church is the gospel, and the Spirit of life, it fittingly has four pillars, everywhere breathing out incorruption and revivifying men. From this it is clear that the Word, the artificer of all things, being manifested to men gave us the gospel, fourfold in form but held together by one Spirit. As David said, when asking for his coming, ‘O sitter upon the cherubim, show yourself ‘. For the cherubim have four faces, and their faces are images of the activity of the Son of God. For the first living creature, it says, was like a lion, signifying his active and princely and royal character; the second was like an ox, showing his sacrificial and priestly order; the third had the face of a man, indicating very clearly his coming in human guise; and the fourth was like a flying eagle, making plain the giving of the Spirit who broods over the Church. Now the Gospels, in which Christ is enthroned, are like these

This idea four aspects or four worlds in prominent in the Jewish mystical tradition. Nowadays, we’ve all heard of Madonna’s studies into Kabbalah, a form of Jewish mysticism. But Madonna’s Kabbalah is a 16th century re-write of a very old tradition which, in Jesus’ time, was known as Merkabah.

Merkabah means ‘chariot’ and the name comes from the book of Ezekiel. The tradition itself dates back to Abraham.

One of the beliefs in the Merkabah tradition was that we humans exist at four levels – physical, psychological (or soul), spiritual and Divine. Each of those levels is represented by an element – Earth, Water, Air and Fire – and we draw on all of them at different times according to how we are feeling.

If the Gospel writers knew of the Merkabah tradition, then choosing four Gospels could be a way in which Jesus’ story could be told at these four different levels – literally, allegorically, spiritually and mystically.

For those who were happy with the overview of the story, then all the Gospels could be woven together in one narrative – as in a Nativity play with both the shepherds and the Magi appearing in the same story or in a Passion Play with Jesus saying ‘My God, why has Thou forsaken me?’ and ‘Father forgive them, they know not what they do,’ in the same scene.

But for those who were looking for a deeper significance, or who were familiar with the esoteric tradition of the time, the four Gospels would provide a feast of different interpretations – and a much deeper knowledge of our own selves at the same time.

Matthew represents the Earth world of ‘reality.’ Matthew writes of earthly power, tribe and leadership, including the importance of the right ‘bloodline’ in the family. He also highlights the physical concerns and challenges of everyday life on earth and refers to Jesus’ physical kingship as Messiah. Jesus’ birth is told with the emphasis is on Joseph’s genealogy and Joseph’s views, on the visit of the wise men with their physical gifts and King Herod’s fears over the birth of a physical King of the Jews and the consequent slaughter.

Here, the temptations before Jesus in the desert are all physical: turn stones into food, put his life in danger to prove that God would save him and the offer of the kingship of the world.

Mark represents the psychological world – the soul’s world. This element of Water demonstrates how fluid our thoughts and feelings are.

It is at this soul level that we can choose whether or not to be separate from animals (the ‘wild beasts’ in Mark’s Temptation story) in that we can become aware of free will. It is through the soul that we decide to act for good or for evil. Jesus’ temptation in Mark is a choice between his baser self and a higher level of consciousness where he may be in touch with angels.

Luke writes of the Spiritual world represented by the element of Air.

Luke is a very feminine account of Jesus’ life that strongly features his mother and his female friends. It contains nineteen stories about women as compared to four or five in all the other Gospels. Doing so emphasises that this is the Spiritual perception of life – women’s place in the physical and tribal worlds were deemed unimportant in the Jewish, Roman and Greek worlds of Jesus’ time but, at the spiritual level, the feminine in Judaism was deeply respected. The Shekinah or Daughter of the Voice was the name given to the feminine aspect of God and it was believed to be present in all married women. In fact, without a wife to light the candles, a Jewish man could not perform the sacred Sabbath Eve service in his home on a Friday night. (In the Midrash – a commentary on the first five books of the Bible – it says that when Isaac married Rebekah ‘The light came back into Abraham’s tent for the first time since Sarah died.’

Luke’s Gospel focuses on Mary’s visit to Elizabeth; on how Mary feels; how she wraps her baby in swaddling clothes and lays him in a manger.

The emphasis is on family, marriage, communication and it works in tandem with Matthew’s tribal aspects, balancing masculine with feminine. For Jesus’ temptation in the desert, it offers the same challenges as in Matthew, but in a different order which is very relevant. Jesus is told to command stone to be turned into bread; given the opportunity to rule the world and ordered to challenge God to save him by throwing himself off the Temple in Jerusalem.

In Matthew, he replies with answers from the written (physical) law and in Luke he takes a different stance, replying with God’s own authority at the Spiritual level.

John’s Gospel does not tell of any temptation; at the level of development he is writing about, humanity would have transcended worldly needs. This Gospel is the Divine World represented by the element of Fire. It tells of direct experience of God. There are no parables, similes or allegories: it is Jesus telling us straight.

For Matthew and Mark the crucifixion is full of anguish. Luke and John are focused on the mystery and the importance of a Divinely inspired right of passage.

The Synoptic Gospels write that the ‘veil of the Temple was rent’ when Jesus died. In an ordinary death, Jewish mystics taught that the veils of the two lower worlds (Matthew and Mark) are opened to let the soul though to the spiritual world. In the case of a Messiah, all three lower veils (Matthew, Mark and Luke) are opened to give direct access to the Divine.

In Matthew, the earth quakes, the rocks are rent and bodies rise from the graves; in Mark, darkness comes down during the crucifixion and in Luke the Sun is darkened.

In John there is no physical reaction to Christ’s death but there is immediate emphasis that the next day is the Sabbath – the holy day of the Jews – and that Jesus’ body must be taken down because that is a day of Divine contemplation and sacred rest.

In the lower worlds of his body and psyche, as represented in Matthew and Mark, Jesus is depicted as crying out at his betrayal – his physical and psychological bodies reacting as any ordinary man would. My God, my God, why hast thou forsaken me?

In Luke, Jesus is able to see his crucifixion as impersonal. There is no judgement of it or other people’s behaviour. Father, forgive them; for they know not what they do …, into thy hands I commend my spirit.

In John, the crucifixion is represented simply as a necessary evil on the way to new life. Without Jesus’ acceptance and acknowledgement of death, resurrection cannot occur. Jesus gives completion to his mother by giving her into John’s care and gives himself willingly to death purely as the next stage of his development as a Divine being. It is finished.

Looking at the Gospels at these four levels teaches me that I react to life at different levels myself and that comfort and happiness come from focus on the spiritual and Divine thoughts, not the daily grind of pattern and habit. The four levels of passion are also useful as tools for forgiveness. They teach me that as long as I focus on the physical or emotional pain, the harder the process is. To see the wider picture and to realise that other people probably had no idea of the level of pain they were causing with their actions is the greatest step to healing as it takes the issue out of the personal. Finally, to accept that the task is all done and dusted – whatever happened is over and in the past and it is my choice whether to call it up again and again or to let it go, once and for all – simply to die to the problem. To die to the problem means that resurrection to a new life truly will happen – even if it’s only in my mind.