The Lessons of Betrayal (Maundy Thursday) 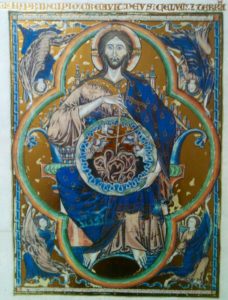 Image of the Cosmic Christ from Toledo Cathedral

Today is Maundy Thursday, the day when Jesus would have come before Pilate and been condemned to die on the cross. You’ll know the story; Judas left the last supper early (and maybe avoided paying—he was such a bad man!) and went to tell the priests and elders where Jesus was staying that night so they could arrest him.

This is the story of betrayal and the majority of Christians have never forgiven Judas and, because his name means ‘Jewish,’ have projected so much anger onto the Jewish nation for 2,000 years. This is odd, given that Jesus, too, was a Jew, but that’s how our minds work at the tribal level.

It’s also odd because Jesus taught forgiveness as a priority: ‘let he who is without sin cast the first stone.’ If we’re to follow Jesus’ example—and that is all he asked us to do; he never once asked us to worship him—then surely we, too, forgive Judas or, at the very least, look into the story a little more deeply.

There have been attempts to do this over the years; The Gospel of Judas made headlines briefly and Rev. Kate Bottley made an Easter TV show looking at Judas’s motivation.

Back in the 1990s I wrote a book on this subject, The Book of Deborah, a novel about Jesus’ adopted sister who became Judas’s wife. The inspiration for the story came to me at Qumran in Israel and, once I had accepted the commission, it wrote itself. I tried three times to change the plot to make Judas the bad guy in line with all I’d ever been taught. The first time the file didn’t save. The second time, the back-up disk I used refused to save and the third time, my computer got disk boot failure. The only files the computer repair guy could save were the ones up to the point where I’d tried to interfere.

I got the hint. I wrote Judas as a good guy.

But it is oh, so much easier to throw blame, isn’t it? We conveniently forget that without Judas’ action, there would be no Christianity.  He was the only one brave enough to take the rap for putting the trail of events into place that would result in the resurrection.

In fact, you could say that he was the only one who didn’t betray Jesus. Peter attacked one of the guards and then denied he had anything to do with his teacher and all the other disciples just ran for it.

So, this Maundy Thursday, let’s look at betrayal and that it is the one thing (apart from death and taxes!) that every single human being will face at one stage in their life.

So, if we’re all going to be betrayed, wouldn’t it be great to have a story that tells us how to deal with it?

For a start, the word translated as ‘betray’ is paradidomi, the primary meaning of which is ‘to hand over’ just as you would hand over the keys to your car to the garage that is servicing it.

And if this was betrayal at the level we are taught it is, why did Jesus firstly tell Judas to go and get on with it (at the last supper) and then hang around to be arrested? He could have slipped away from Gethsemane easily and returned to Galilee to continue teaching and healing there. But he waited, deliberately, and he told the disciples to stay awake. That’s not just stay physically awake but also psychologically awake to watch what was actually happening.

What the Bible says happened is that Judas kissed Jesus at the moment of arrest (the Greek word is kataphileo—to kiss tenderly). And Jesus, in return, called him ‘friend.’ And never once, before he was crucified or after the resurrection, did he speak one word of blame.

Was this because Jesus was simply the ultimate Good Guy? Maybe. But consider the rest of the story. For the resurrection to mean anything to the followers of Christ, Jesus had to have been proven to die. And the only way that could possibly happen was with a public execution at the very time that the vast majority of the Hebrew nation was in Jerusalem for the great festival of Passover. The Romans or the Jewish priestly class could easily have disposed of him quietly in a back street and then any story of the Risen Christ would just have been dismissed.

Instead, Jesus creates a complete furore by riding into Jerusalem like a King. Jesus did nothing else like that; he always told people not to blurt out about his healing of them and he often removed himself to desert places for some peace and quiet. The Palm Sunday parade was completely out of character—unless it was designed as the set-up for the whole crucifixion-resurrection story.

So, here we have a man choosing to go to his cruel death and even setting out the time and the process by which that will be achieved. For that, you have to be able to trust your co-conspirators. Judas was the only one willing to shoulder that responsibility. He broke down afterwards, of course, as any human would, seeing what transpired.

And, if you read carefully, you can see that Pilate was looking for an opt-out on sentencing Jesus. He washed his hands of it afterwards, for sure, but Jesus really didn’t give him any option by refusing to deny or defend himself. I gave Deborah that kind of courage too, in the second of the novels about her. I know for sure that I would never have it.

Now, I know there are many stories that say that Jesus didn’t die on the cross, just like there are many that say he spent the ‘missing years’ in India (and I’ve written a book about that, too!) but we can dance as much as we like about the semantics of things. What matters is his teaching.

So, what is the teaching here? I think it is an enormous one—and one that I know I never wanted to believe myself. But I do think it’s true.

No one can betray us without our permission.

Jesus clearly gave Judas permission to do what he did. Do we do that? Hell no! But we are always, in some way, unconsciously complicit in the way we are betrayed. The partner who leaves us (did we truly not see the signs that they were unhappy or a serial monogamist or did we ignore them?); the partner who is unfaithful (were there no clues at all that they were wanderers?); the person who told our secret (did we not betray ourselves first by having a secret that was not to be told and then telling it ourselves?); the boss that fires us (did we truly not spot that we weren’t a good fit there?) I could go on but you are either with me or you are not by now and I’m not asking you to believe me; just to consider it as a possibility.

Even so, the real task is how to forgive—both ourselves and the others. And that’s tomorrow’s story about the crucifixion itself.