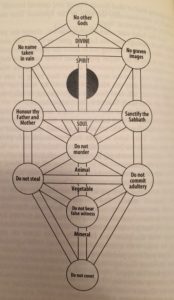 The Second Commandment is:

Thou shalt not make unto thee any graven image, or any likeness of any thing that is in heaven above, or that is in the earth beneath, or that is in the water under the earth: Thou shalt not bow down thyself to them, nor serve them: for I the Lord thy God am a jealous God, visiting the iniquity of the fathers upon the children unto the third and fourth [generation] of them that hate me; And shewing mercy unto thousands of them that love me, and keep my commandments.

Judaism regards Christianity as essentially a Pagan religion because of its images of God as the old man on a cloud in the sky. As the majority of Christians also believe that Christ is God, all the crucifixes in Church, around people’s necks, in the picture to the right and on altars could also be seen as violations of this second commandment.

However, the commandment is not for no images at all but for no graven images. A graven image is one that is set in stone, allowing no personal interpretation; no disagreement, no alternative.

The whole idea of the One God is that It is sexless, formless, absolute – not male, not female, not white nor black, not old nor young. The Hebrew for “the LORD God” in the Old Testament, Yahveh Elohim, is perhaps intended to reflect that. Hebrew has no neuter tense; Yahveh is masculine and Elohim is feminine with a masculine plural ending. In fact there are five masculine names for God and five feminine ones in the Hebrew Testament so there can have been no original intention to have a totally male God.

Islam and orthodox Judaism take the second commandment very seriously – there are few images of humans in synagogues (however, I’ve seen a few in the windows of Birmingham Central Synagogue) and none in mosques.

However, we live in a world of graven images. The “perfect” Western woman, for example, is a supermodel: early 20s, 5’8” size 6 or less, blonde with smooth skin. Fewer than 2% of Western women actually look like that but, nowadays, there is Photoshop, Botox and surgery to ensure that the image is perpetuated.

Lion and I have two beagles, one of which is a former show queen and one of which is a former hunt beagle. The show queen is utterly beautiful, everything a beagle ‘should’ be. And she’s dim as a Toc H lamp. The hunt beagle, who doesn’t need to be pretty, is lean, strong and smarter than smart. No one tried to make her more beautiful with selective breeding or worried about her size. My mother has spent six years saying she isn’t ‘a proper beagle’ but she is. She is 100% beagle, she just doesn’t fit the Kennel Club’s graven image.

Organic food was rejected for many years because “good” food is beautifully colored and has no worms, bugs or marks on it. Only when organic food looked as perfect as chemically treated food did it find any kind of mass success. A wonky carrot tastes just as good as a straight carrot but that was not the required graven image. Luckily this is beginning to change with the sale of less than perfect produce in our supermarkets as well as in farm shops.

‘No graven image’ does not mean that we should not strive for excellence; just that we should guard against making one image the only right image. As soon as we do that we have a religion and an unhealthy one at that. Graven images belong to the ego, not the Soul.

The “jealous God” aspect of the second commandment also causes some problems in interpretation: it is generally thought to be a reference to the traditional judgmental Old Testament God.

In his book Prosperity, Charles Fillmore explains that the Hebrew word used for ‘jealous’ – kannaw – means “jealous of principle.” This principle, Charles explains, is the Universal Law – the law of Karma – what you put out you get back. So this is an injunction that if we make our graven images and stand by them, then they are what we will receive in return. Interestingly, the word “generation” does not exist in the original Hebrew and has been added in later translation, apparently for clarity. It is entirely possible that the sentence refers instead to our actions returning to us time and time again — “what goes around comes around” or the law of Karma.

There is a great deal of resistance over the idea of Karma in the Christian world although the possibility of multiple lives is even mentioned in the Gospels when the disciples tell Jesus that some people think he is Elijah come again or John the Baptist reborn. Also in the story of the blind man (John 9:2) where the disciples ask Jesus “Who did sin, this man or his parents that he was born blind?”

One of the reasons why the work of the early Church Father Origin was made anathema by the Nicean Council of 553 was due to his insistence of “the pre-existence of souls.”

It is all down to our attitude; what we decide is the ‘right’ thing. But that’s the ego’s game, not the game of the Soul. If we have a graven image of a judgemental God who damns all to hell who don’t believe the right pathway, then we will almost certainly try to impose that on everyone else ‘for their own good’ and that’s where good religions go bad.

Let’s let that one go, shall we?