Passover, Sacrifice and the Promised Land 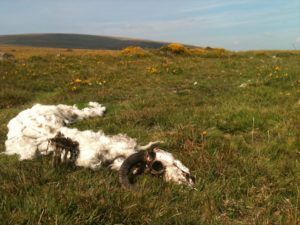 Not quite the sacrificial lamb … but the best picture I’ve got!

This year, the Jewish festival of Passover runs over Eastertide – just as it did at the first Easter. I love the years when they coincide because it helps me to see how both festivals have the same root meaning – betrayal, sacrifice and resurrection.

Of course that only works if you are willing to see the Bible as allegorical, mystical and metaphysical rather than literal. Which I do.
What we generally don’t understand nowadays is that none of the great sacred texts were ever meant to be regarded as set in stone—they become graven images as soon as they do. By the third century CE, both Judaism and Christianity had decreed that just one text was the ‘right’ one, discarding many other versions. In doing so, they lost the oral tradition which brought insight, compassion and humility to the great Teaching.
Neither were the texts meant to be read privately by an individual as the vast majority of people simply couldn’t read until the last few hundred years. Texts were meant to be read out loud by a scribe/priest and then debated—as they are still debated in the Yeshivas in Israel.
Whether or not the Exodus from Egypt happened or didn’t happen—see this article by the Biblical Archaeology Society for what facts there are—what truly matters is the story behind the story. If we see it like that, it will tell us about our own lives; how we care for our souls and for others. With that level of understanding the story of the Exodus is just as much a parable for us today as it ever was.
The basket containing the baby Moses, the son of Hebrew parents faced with an Egyptian holocaust, was found by Pharaoh’s daughter who raised him as her own. That made him adopted brother to Ramses who became the next Pharaoh.
This is a story of pride and humility. We all have pride and pride leads to a fall. Moses falls when he realizes the cruelty the Hebrews are facing from ‘his’ people and, in his anger, he kills a man. That destroys his privileged life as his brother will not defend him. This is Moses’ experience of betrayal. His exile from Egypt is what Franciscan friar, Fr. Richard Rohr, calls ‘necessary suffering.’ Unless we are challenged in a way that takes away our pride in our own status and achievements, we will never become open to true spiritual guidance. The opposite of faith is not lack of faith; the opposite of faith is certainty—and that often leads to pride.
For most of us, a humbling experience such as divorce or illness or loss of a job will hit our pride. Our cultural pattern nowadays is always to blame the other; it’s not our fault—the other is the rotten one and so we never learn. I will say categorically that the first time something happens to us it is not our fault. But it is our responsibility to grow from humiliating experiences, even if only to ensure that they do not happen again.
This is where Moses and Ramses part, not just physically but psychologically. Moses becomes a shepherd and marries Zipporah, a wise shepherd’s daughter. What a come-down from being a prince! He accepts that this now is his lot in life due to his own actions and finds happiness in it, and the allegory of being a shepherd is Christ-like; he watches over those who are lesser than him, ensuring they are fed and nurtured. Yes, they are going to be sheared for wool and killed for meat but the sheep represent our own bodies which serve our mind’s desires so much better when we take care of them well.
Ramses, on the other hand, rules with an iron hand, demanding more and more from his slaves and, when Moses is sent by God to free his people, Ramses’ pride sparks rage.
You could see Moses as a doctor or an environmentalist giving a diagnosis that if Ramses doesn’t ease up on his over-consumption, one way or another, either his body or his land will fail.
The Bible teaches that the ten plagues were sent by God; what the allegory tells us is that you can only drive your own body/family/servants/land so far before something will go wrong. Pharaoh abuses what serves him—and something has to give.
The final plague is the killing of the first-born which is surely karma for the execution of the Hebrew children years before. For us, it is the lesson that the one thing we hold onto as the most precious to our pride has to be destroyed in the final catastrophe or diagnosis that will force us to change our minds and lifestyle. In my case it was a marriage, a mistaken belief and then an illness, all of which taught me how very sure I had become that I was ‘right’ when it was not necessarily so.
The children of the humble take the blood of a lamb to smear on their doorposts so that the angel of death will pass over. The lamb, of course, is an image later used for Christ. They know that they are being saved by the meekest of the meek, not by their own cleverness. And so they are set free to journey away from everything they know, into the desert.
I’ve had many years in the wilderness and maybe so have you. We’ve wanted to turn back to the comfort of the old life again and again but somehow we’ve known that the only possible journey of the soul is to continue on in hope and trust that there truly is a Promised Land.
So, if you’re celebrating Passover or Easter, and your heart is troubled or hard, may I wish you your own perfect Exodus to an unknown land where you can open heart and soul to the Manna that comes from heaven and find peace, humility and joy. That is our resurrection.