So This is Advent… 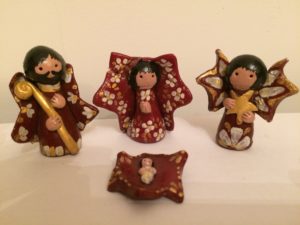 It’s Advent 2017 — the start of Christmas, right? Certainly it’s the time when folk like me who refuse to even consider the Festive Season until December finally surrender to the behemoth that is Saturnalia or, at least, to the shopping and preparation thereof.
The word Advent is taken from the Latin word adventus, meaning “coming” and as Christmas is definitely on its way, that makes sense. But actually, it doesn’t. Advent is meant to be a season of fasting, prayer and reflection (I’ll pause a moment here while you finish falling over with laughter).
We’re going back centuries but 1500 years ago, Advent was the time of preparation for the baptism of new Christians at the January feast of Epiphany — the celebration of the visit of the Magi to the baby Jesus. It wasn’t about the huge scoff-fest, mince pie, chocolate, party season and alcoholic secret-Santa splurges of the modern day — we really have regressed to the old Saturnalia.
Which could be a perfectly good thing … because, let’s face it, Christianity as we know it has pretty much lost the plot. Much of it has been appropriated by the fundamentalists and the prosperity gospel folk all of whom say ‘worship Jesus or go to hell’ and discarded 90% of the original message. Everyday Christianity, the kind that goes to church on Sunday to say sorry for what we did on Saturday and fully intend to do again on Monday, is dying out with the older generation. There are now very few new volunteers for The Mother’s Union, the Parish Council or the Church Wardenship and very little message that appeals to the modern entitled generation.
Yes, we get urged to give to charities at Christmas — that whole winter parade of sending some money to worthy causes that starts off with the BBC’s Children in Need in November — and of course this is A Good Thing.
And the anti-theists on the comedy circuit and on social media get even more vicious about the season, pointing out its hypocrisy and how religion is simply fundamentally wrong on all counts.
Which, mostly, it is.
If anyone actually asks me what I think of Christianity, I tend to say that I think it would be a jolly good idea. To paraphrase G. K. Chesterton, Christianity has not been tried and found lacking, it has been found hard and barely attempted at all.
In the old days when we lived in small tribal groups without much comprehension of the wider world, other religions and cultures and we were absolutely sure that our country, our way of life and our religion were the only ones that mattered, we could get away with a small tribal God. We could use the Biblical laws to encourage morality and good behaviour and blend in all the pagan festivals to keep all the people involved and engaged. We could teach through the beauty of stained glass windows and very few folk actually read all the challenging bits in the Bible. Inquisitions and witch hunts aside, we did pretty well. But now, with the global news and the Internet, not to mention missing Gospels turning up throughout the 20th century and religious terrorism, it’s entirely obvious that God is not small; not tribal — in fact has no interest in imposing the terms and conditions that we say He imposed upon us.
But even so, in the hardest times, like when you’re holding the injured body of your child after a bomb attack, there is Something there with you. This is where we find the real God; the mystical strength and compassion and the courage that we need in the difficult days. As St. John of the Cross, Ernest Hemingway, Leonard Cohen wrote, the broken parts are where the light gets in. We can never discover God if we try to be in total control of our life — because control blocks Beingness.
I believe that God is Quantum. Spirit is almost certainly Dark Matter. It’s all about the Great Beingness, not the Great Offendedness. My brother often says that religion was started to control people. I disagree; religion was started to make sense of death, it became something that is used to control people. And because of that, it breeds offence. 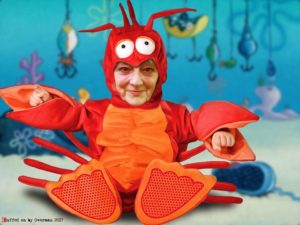 Of course we’ve got silly with Christmas; we have lobsters at the Nativity (thanks to the fabulous Will Overman for this picture of me as a Christmas lobster from the movie Love Actually), we have six-year-old tinselly angels, we have chocolate Advent calendars, we have rampant consumerism and five different birds all stuffed with each other from Aldi. We have ridiculous amounts of money spent on things that break within 24 hours and all the ‘lies to children’* that are appropriate this time of the year.
My point here is this: why not use Advent like Lent is traditionally used — to give something up instead of just scoffing down the sweeties? And please, if you are willing to do so, let it be your offendedness that you surrender. Whether you’re offended by Christmas itself, by Christianity, by Islam, by Judaism, by any ordinary, everyday idea of God, by consumerism, by drunken office parties or by people on Facebook, just give it up for the next three weeks. Be nice. Be kind. Be Beingness. Be God. That’s exactly what you really are — a slice of God wrapped up in something similar to a pig in a blanket.
It’s about being kind, discerning, merciful, true and beautiful. And if someone says ‘happy Christmas’ instead of ‘happy holidays’ please, try – just try – to remember that the request/instruction in however that phrase is ended is a wish for you to experience happiness. It is not an attempt to belittle, insult or offend you.
If you actually understood one sentence from the probably accidental founder of Christianity, Jesus and his Beatitudes, you’d know that they are all about happiness — the Greek makarios, generally translated as ‘blessed’ actually means ‘happy.’ Yes, letting go of pride, being humble, being ‘poor in spirit’ are the recipes for happiness. Entitlement, busy-ness, buying stuff and more stuff and complaining really, really aren’t.
The whole idea of original Christianity (the idea that is so horribly lacking in so much of conventional Christianity) is that we are all One together and we are here to be happy and to assist others to be happy. If that means turning over the tables of the money-changers who were cheating folk, so be it. I bet a big cheer went up in the Temple court when Jesus did that and lots of folk felt very happy! And the key element to it is that he just did it once to make a point; he didn’t bitch about the men afterwards, he didn’t start a social media campaign to get them banned; he didn’t blame the government or the Temple officials. He saw something wrong and acted; what he didn’t do was get offended about it.
So this year, let’s give up the offence and if someone wishes us ‘Happy Christmas’ and we’re an atheist, or ‘Happy Holidays’ and we’re a Christian, or ‘Happy Solstice’ and we’re a Jew or ‘Happy Saturnalia’ and we’re a Muslim, let’s just say, ‘thank you’ and wish them the same. Because what we are is not Christians, Pagans, Jews, Hindus etc… we are simply souls wrapped in pigs and blankets.
Simple Christianity: no hierarchy, no robes, no silly hats, no churches, no hatred, no blame. Love over law — every time.
Happy Christmas!
* Lies to children is a phrase from Terry Pratchett’s Discworld novels where Death explains how necessary stories such as Santa Claus are in order to teach us the principles of love, wisdom, reward and truth.