The Voice In My Soul 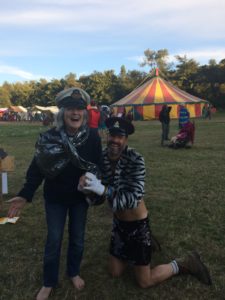 With the loveliest of men who danced with me in his spangly skirt – and who lent me a hat – at Buddhafield in Somerset.

I was lying in the bath, pondering the Bible passages that orthodox religious folk use when discussing the folk they disapprove of – as you do – when I got a sentence in my head.

This doesn’t happen all that often. And when the sentence appears in that tone of thought, it’s usually something important. Atheistic and religious friends will probably dismiss the rest of this article immediately as fanciful rubbish but I’m the one with the experience and I know it’s real. This is not ‘my’ voice.

The first time it happened, I was nine. It was in a church, which was probably convenient, and it was during the Magnificat, the Canticle of Mary and Elizabeth who are meeting up with Jesus and John the Baptist in their wombs. A presence of colour and light that I could taste, hear and touch enfolded me and wrote four words in my soul that didn’t make any sense at all back then, ‘You will do this.’

Do what? Good question. I had no idea.

Over the years, the Voice (it deserves a capital letter) has shown up with a few clearer thoughts. It saved me from an attack by a giant barracuda off the Barrier Reef in Australia – ‘swim forwards as fast as you can, make as much noise as you can and hit it on the nose with your fist.’

Now that’s good, sensible advice. It could have come from me but it didn’t. It wasn’t my voice. At the time, I was lost and lonely in the water in my snorkel, having swum away from all the other people having fun as my husband was only three months dead and I didn’t have a lot of will to live. With the barracuda, that will to live returned rather suddenly, hence the sudden good advice. Which worked.

Another time, It gave me the plot of my first novel, The Book of Deborah, a fictional account of the life of a female cousin of Jesus who was raised as his sister. The whole book arrived neatly in my head as I was looking out over the desert of Qumran while on a pilgrimage. This time I didn’t hear It at first, a friend who was standing next to me heard It and pointed It out. Once she had, It was like receiving a download you simply couldn’t stop.

Once I started writing the book, I tried to change the plot at one point because I thought I knew better. The computer failed to save the first day, failed to save on the floppy disk the second time (yes, it was that long ago) and the third time, got disk boot failure. I got the hint.

Once the book was written, an agent and a major publisher showed up very neatly.

Back then, I asked ‘why me?’ Mostly because I’d never thought myself good enough to hear God’s word. The answer that time was both unexpected and beautiful. ‘You know something, Maggy? You’re right. You’re not good enough. You’ll probably never believe that you’re good enough. But you were the only one listening.’

So, what’s my point?

My point is that, concerning the Bible and the LGBTQI community (you guys really do need to find an acronym – though I’m grateful that you have finally discovered a vowel), the Voice came up with a six word sentence. I rejected it because I’m a bit of a coward at times. And then it said it again when I was in bed. And again while I was walking the beagles. And again at the exact moment when I was consecrating the Eucharist last Sunday. Which was a bit of a bummer really because you can’t ignore that one.

It said this, ‘Tell them I’ve changed my mind.’

That was it. Obviously I’ve spent the last few days debating it – God is very courteous about that part of it and just listens patiently without conceding anything. I couldn’t really say, ‘why me?’ given that I spent several days this August prancing around at the Edinburgh Fringe in a rainbow clerical shirt, given that I danced with a fabulous gay guy (see picture) who lent me a hat at the Buddhafield Festival, given that my step-daughter is gay and given that two of my best friends are gay/trans. I’m not gay, by the way. I’m a married, white, Western female with all the privileges those convey.

But even so, why me? Even if I’m still the only one listening, aren’t there many other aspects in the world that need my attention? Pollution, animal welfare, human slavery, politics, corruption, Big Pharma etc. etc. etc? That one I did ask. The answer, this time, was very clear: ‘You will do this.’

You will do this. After fifty two years, I get it.

There’s no point in playing Bible tennis with those who condemn Queer Folk. You can do it as much as you like: ‘St Paul said this…’ ‘Jesus said that…’ ‘The Old Testament says this…’ and you can debate for hours. But if God says, ‘tell them I changed my mind,’ you just do one of three things. You can call me a liar or deluded – or you can believe me.  Frankly, I don’t care which because I’m just going to go ahead and do it.

Whatever the Bible may say about LGBTQI folk – or any Queer Folk at all – is irrelevant, because, even if every word in it was true 2000 years ago, God’s mind has now changed!

That is the message.

But what I believe doesn’t matter. In fact, it’s probably important that I don’t believe it but that I’m still willing to carry the message. What does matter is that I will take what I, in my heart, know is the word of God, spoken to me, into the world. That is what needs to be said now. We are created in God’s image; we, as St. Teresa of Avila said, are Christ’s only physical eyes, hands and feet now. And I know, know, know, that God made all the Queer Folk and that God doesn’t make mistakes.

And, after all, if Christ can speak directly to Saul, who was a hard-line fundamentalist and change his  mind, God can – and does – speak to anyone who will listen.

Are you listening? God’s mind has changed. Let’s dance.