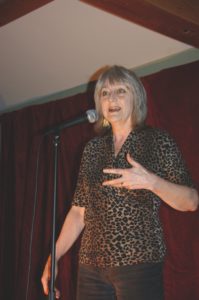 This is part of a series of blogs about my appearance on Britain’s Got Talent. I wrote it first on my Life of Miracles blog and you can read the full story here. Today’s excerpt is about the real reason I was there. It was not to become a celebrity!

In the assembly room for performers, I start talking with a young man who’s dressed in a fairly dramatic clown-type outfit. He’s not impressive in the way that the audience are expecting him to be impressive. Oh, he’s a lovely boy, but he doesn’t give the impression that he’s got an act that anyone, realistically, would expect to go through. I wonder if he’s a patsy – one of the acts that they put on to get four Xs and good TV. It’s incredibly cruel if so as he’s full of hope and expectancy. ‘I must be good if I’ve got this far,’ he says.

In theory, yes. I’m aware that I was bypassed through the first two audition levels so I am almost certainly expected to be good or to be weird. But I’m not sure about this guy… [later, it transpires that I am right – he gets four Xs and leaves crushed and humiliated]

Finally, it comes my chance to be interviewed so they can use clips if I get through. It’s now the dregs of the evening when all the posh presenters have finished and the interviewers it’s an older woman who starts asking me intelligent and sensible questions. They are fairly intense including the ‘why did you become a priest?’

I tell her the story of Henry and how the Catholic chaplain told me that he couldn’t go to heaven as he wasn’t a Christian and how I walked up the aisle in church behind his coffin, hearing him damned to hell. I tell her about the spiritual funerals I began to do so that no one else would have to go through that extra trauma after bereavement. There is a tear in her eye. I’m not sure this is the kind of thing that a talent show is looking for. But they wanted me, and this is my story.

We talk too about spirit, about religion – how God doesn’t fit into boxes and doesn’t follow the terms and conditions that we set – we talk about love and Lion and about life the universe and everything. I don’t mention dis-ease because right now I don’t have any, so what would be the point?

The second show is running late and it’s about 9.30 pm when I am taken down to backstage. There are a load of the other acts, waiting to go on. Before that, they want to film me talking with a young comedian in a baseball hat. I’m supposed to comfort him because he got four red Xs. This implies that they might think I’m better than him but I don’t know. I do my best; tell him to keep honing and practicing and find his niche and tell him that some comedians work better in small, intimate circumstances and that he shouldn’t loose faith.

Then I stand with the Robbie Williams impersonator guy who’s thrilled because someone just videoed him on their mobile phone to say happy birthday to the real Robbie Williams (Ant and Dec know him). I’m glad for him. I’m sure he’ll do well.

He gets for red Xs. Apparently he doesn’t sound like Robbie Williams. The poor man is totally gutted. Five years of work gone. If it’s shown on TV he will be doubly humiliated – and it will be shown. He’s done so much filming for them today that they must have had him down for a featured place.

The young man I talked with in the holding room goes on before me. I can’t hear what he’s doing because now it’s my time for my televised ‘before you go on’ talk with Ant and Dec. For some reason, I say ‘bless you both,’ when I’m introduced and they are shocked. But they say ‘thank you’ and talk to me about something but I can’t for the life of me remember what.

And just as I am standing in the wings, heart in mouth, and microphone in hand, a researcher comes up and taps me on the shoulder.

‘Simon may ask you to tell him something interesting about you,’ she says. ‘Make sure you tell him about the book you wrote about the Messiah and America’s Got Talent.’

‘Really?’ say I, astounded. I would never have done that without prompting. But I am directable, remember? And truly, that researcher was an angel.

‘On you go,’ says a member of the crew. It’s one of those ‘remember this for a lifetime’ moments. I say ‘Thy will be done,’ because I am here by God’s will and to be God’s vessel. And I begin to walk out into the lights of the stage.

It’s lovely walking out on that stage into the spotlight with thousands of people hidden in the dark! What an amazing experience! I’m not nervous at all which is very strange. In bright lights at the front, David Walliams, Alisha Dixon, Amanda Holden and Simon Cowell are sitting at the desk with the big red buttons. They all look very small and the women, perfectly smooth and made-up, look like dolls.

When I’ve visualized this (and I have, a lot – it’s been wonderful in dark nights when I couldn’t sleep) I’ve always focused on talking with Simon Cowell. That’s probably a bit silly because David Walliams is the comedian and Simon’s not at all likely to get someone like me. But that’s what I did. And it worked.

Now I can’t remember it word for word, but it goes something like this:

‘I’m Maggy Whitehouse from Dartmoor in Devon, where the moor is covered in newborn lambs.’

‘Okay Maggy. Tell me something interesting about yourself.’

‘I’m an independent Catholic priest – and no, I’m not a bloke in drag. If I were, I’d have big hair and much better make-up.’

All four of them now are looking at me with open mouths. So I have time to follow the researcher’s advice.’

‘And I once wrote a book about what would happen if the Messiah came to Earth today. And I wondered what kind of person he could most usefully be. And I thought Simon Cowell.’

Silence. Then David Walliams says, ‘More like the devil, surely?’

Simon says, ‘Maggy, please would you send me a copy of that book?’

And that’s the moment when I knew why I was on Britain’s Got Talent.

There was more discussion about my being an independent Catholic priest. And some about what my ambition was – I said to be a successful spiritual comedian and Amanda said ‘that would be good.’

And then I did my act.

Yes, it was an awful moment when I had finished, the applause was dying down and I could see that none of the judges was clapping. However Simon was looking at me with great interest.

David, Alesha and Amanda all said ‘no.’ David gave me some constructive criticism – and said I’d been going such a short time in comedy etc. etc. and that they all really liked me, just not the act.

And then it was Simon Cowell’s turn. Now Simon can destroy an ego in five cutting words. That was a rather anxious moment for mine.

He looked long and hard at me and said ‘I’m going to say “yes.”’

So I didn’t get through. Not by a long way. But I surprised Simon Cowell and he said ‘yes.’

I I have no idea what the other judges said to him afterwards. I have no idea if he ever read that book. I was, obviously, disappointed that I didn’t get through – but I think I was there to talk to Simon Cowell.

If you want to make God laugh, tell Him your plans.