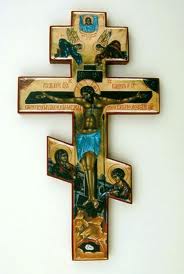 If anyone asks me what I’m doing on Holy Saturday, I always say that I’m spending the day dead.

The point is that this is a day of contemplation; Good Friday is over and Easter Sunday still to come. And I contemplate the idea of the cross and what it means. It means learning to let go.

It’s odd really that Jesus was on the cross for six hours – less time than most women are in labour – and yet Christianity has kept him on it for two thousand years. Yes, the image of Divinity suffering as we have can be very comforting but, truly, that was not the point. Because as long as we keep him there, we keep the problem of it all being terribly unfair.

There are three points here and the first is the one most likely to cause offence to Christians. Firstly, we are taught that Jesus died to atone for Original Sin – the idea that we are born sinful because of Adam and Eve and the Tree of Knowledge.

And yet, the concept of Original Sin is unknown in Judaism and Jesus never taught it in his lifetime either so how could someone who didn’t know the concept die for it? And where did it come from? It came from Christian teachers later on. St. Paul is not blameless here – and St. Paul, great though he may be had SO many issues. He used flat-out emotional blackmail over money in his letters and he was, frankly, wrong in his teaching that Christ would return in his lifetime.

Nowadays, people who say they are channelling Jesus are regarded as loopy. I’m not saying St. Paul was loopy but I am suggesting that we might well be interested in taking Jesus’ teachings over his because whenever you receive inspiration you are always prone to passing it on according to your own inner conflicts.

What I believe Christ came for was to show us the way to live, to love and how to forgive.

The thieves are mentioned in Matthew and Mark throwing insults at Jesus. But in Luke (23:39) the first man says to Jesus, ‘If you are Christ, free yourself and us,’ showing that he has no higher consciousness; he just wants to be released from his pain without acknowledgment of why he is there.

The second man, however, says ‘leave him alone. We deserve this; he does not.’ Thus showing that he realises his own responsibility in attracting his punishment. He also asks Jesus, humbly, to remember him when he comes into his Kingdom.

And Jesus replies to him ‘today you shall be with me in paradise.’ (that gives the lie to the idea that Jesus descended into hell as Christian liturgy teaches but we’ll look at that another day because there’s a story there too).

So, in a nutshell, the first man is all about blame and unforgiveness. He doesn’t see why he should be where he is. The second man understands that cause leads to effect. He’s not liking where he is (who would?) but he accepts that it is how the law works. And because he has the humility to accept that, he can get to paradise.

On the Kabbalistic Tree of Life, the first man is placed at what’s known as the Liminal Line – the place where we are stuck in our ego’s beliefs about ourselves and the world. Yes, at that point we have the choice to realise we have responsibility but mostly we won’t take it because it is so much easier to blame the other and deny we had anything to do with it. You’ll notice on the Greek Orthodox cross pictured, that the lower line is angled. That represents the first man falling down on the wheel of karma. If we don’t learn, we are fated to repeat the same mistake again … and again … and again. In this life or, possibly, the next.

The second man is placed at the level of the Soul – where we fully understand that we, and we alone, are responsible for our thoughts, words and deeds. At that level, we can actually choose hope over habitual pain and that is what opens the door to healing.

The third point is Jesus’ own phrase (Luke 23:34) ‘Father forgive them; they know not what they do.’

Could you do that? I know I couldn’t when I found out that chemotherapy killed my first husband, not cancer. I know that because the registrar told me so. ‘You’re lucky, Mrs Barley,’ he said. ‘It’s an easier death.’

It took me 30 years to forgive what had been an honest mistake by doctors who thought they were lengthening Henry’s life. All I knew was that he had been given a year to live and was dead in two weeks. I preferred to blame; I accrued information from everywhere that chemotherapy was always wrong and bad and even evil. I made it a crusade.

Until the day I was two weeks from death myself and the only thing that could possibly save me was chemotherapy. That was my crucifixion and the day I learnt that I was wrong. I had done all the ‘right’ things with diet and internal journeys and meditation and complementary medicine and none of it had worked, physically at least. But in my soul it had worked because I learnt the humility to realise that this time, the doctors were right.

I still don’t like chemotherapy – even though it gave me more time to do more work on myself and I am very grateful for that. At this moment I am fully healed without it (and that’s another story). But as long as I held onto my hatred, I was going to face crucifixion at some point until I was willing to say these beautiful words:

“Father/Mother God, I know there is no need for me to ask you to forgive those doctors who treated Henry because they were doing their best and they truly believed they were doing the right thing. But I will ask you because it shows that I know better now and I have forgiven what there was no need to forgive. Thank you.”

I got off the cross by dying to my prejudice.

Wishing you a peaceful holy Saturday. Have a contemplate and maybe, just maybe, see if there is anyone or anything that you, too, could consider forgiving.