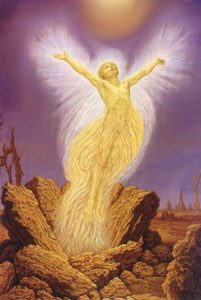 Many years ago, my friend Rachel who’s a Greek/Theology scholar amongst many other wonderful things said this:

“It’s not the crucifixion and the suffering that are the key, it’s the death. Once you agree to die then resurrection is a done deal.”

I’m paraphrasing 🙂 but can you get the point?

I always got it intellectually but nowadays (with a few hiccups and still some moments of backsliding) I’m beginning to get it in my Soul.

We all get crucified — whether it’s divorce, bereavement, loss of job or a health crisis or something completely different. Some of us jump off and just move on. The problem comes when we hold on to the cross for dear life because somehow that pain has become part of our identity. Possibly we get more attention and love because of the suffering or maybe we just get used to the pain.

Caroline Myss calls it ‘Woundology’ and she tells a story about a woman who always had to say that she couldn’t do this or that because it would conflict with her incest survivors’ support group. The need was to tell everyone how much she needed that group and that she was a survivor of incest. BUT the group obviously hadn’t helped her move past the horrific reality of incest because she still needed to point out her ‘wound’ when it wasn’t relevant to the conversation. She could easily have said, ‘No, I can’t do that date’ without the additional information.

Wounds re-invent themselves too. Whatever weakened your psyche in childhood will return again and again. My classic and all-embracing wound was called ‘nothing I do is good enough’ and came along because no matter what I did, I couldn’t heal my mother and I wanted to, desperately.

She gave me a clue (which I missed – duh!) when I did a talk for a society of which she was a member years ago. It was a talk on healing and afterwards someone said to her, in my hearing, ‘you must be very proud of your daughter’ and she replied, ‘yes, the only person she can’t heal is me.’

Anyway, it repeated and repeated in a subtle way even though I’ve had an amazing life, travelled round China, worked in radio and TV, written more than a dozen books, been ordained, become a professional stand-up comedian etc. etc. But there have been times when it counted when something that really should have worked simply didn’t. Lots of times. That was where what Eckhart Tolle would call ‘the pain body’ said, ‘let’s make sure Maggy gets taken down a peg or two.’

So what a classic opportunity for this demon (and it was an inner demon) to come up when I was diagnosed with lymphoma: ‘Gosh, look, Maggy. All your holistic and spiritual lifestyle, your teaching, your books and your ordination has led to is this, therefore, you must be the biggest fraud on the planet.’ Tie that to my learned ‘wound’ that chemotherapy had killed Henry and we can really get some humiliation going for Maggy, can’t we just?

But humiliation and humility are, oddly enough, uncomfortable bedfellows. Embrace the latter and you get off the cross. Hold the former and you’ll hang there, dying but not dead, for as long as it takes.

I have a friend on Facebook who is still hanging on the cross of her lost baby 20 years ago. Now that’s a terrible, terrible, genuine wound but 20 years have passed and she still needs to reinforce it every month. She’s re-inflicting it on herself with every sad reference. She’s crucifying herself because she daren’t let go.

In exactly the same way, my ex-husband left me once but through my hurt pride I made him leave me a thousand times in my thoughts.

But get off them was a must. I have to say, every time, ‘I don’t know.’ I don’t know. I only know what worked for me. And I’m glad and grateful that it did.’ That’s my resurrection.

I’m also sure that is exactly what Jesus came to show us: not that we should be ‘Christians’ and worship him, but that we must follow his example so that when we are being strung up for no discernible reason whatsoever, we can have the humility to say ‘so be it’ and to forgive (which means ‘to give up that which went before’ – not to condone).

We can’t get off immediately – of course we must grieve and work through the pain and the problem – and yes that can take a year or two, maybe even three. And there will probably be times forever when the original pain still kicks us. But if the wound needs to be re-expressed in virtually every conversation after a couple of years, then there simply has to be part of us holding on to the problem. Yes, you can join a campaign to make sure ‘it’ never happens again. But do that from a place of healing, not a place of woundology. It’s much, much more powerful that way too.

That, for me, is the whole big picture behind Jesus’s crucifixion and resurrection. As Dolly Parton said, ‘get off the cross; somebody could use the lumber.’