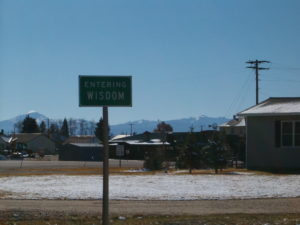 The plumber came round on a Tuesday morning wearing a navy blue baseball cap with an image of a mountain and the word Wisdom on it. It really floated my boat to think that you could walk around with “wisdom” on your head so I had to find out how to get one.

The answer was simple: there’s a town called Wisdom in western Montana and they sell caps…

At the time, my ex and I were living somewhat precariously in Bozeman, Montana, trying to run a café. We had visa problems, which were soon to ensure that we were forced to sell the café and move back to the UK. The whole story of how I got a visa in order to return to Montana, sell the café and get my beloved beagle, Didcot, home, have are on my other blog. This is the story of the hat.

While I was living in Bozeman on my own, I was in such fear that I decided to set myself some goals to raise my spirits. The main one was to travel to Wisdom (I could do with some, I thought) and get myself a cap.

It wasn’t an easy journey; it was scorchingly hot for a start and my car didn’t have air conditioning. And the prairie dogs were more than usually suicidal on the smaller roads that led to this tiny place in the middle of one of the most beautiful nowheres in the world. But after a two-and-a-half-hour drive, I got there.

There were two questions that came into my head on arrival in Wisdom, Montana, the first being “where is it?” when I was standing in the middle of Main Street (Wisdom is very small). The second was “why on earth would anyone call this place Wisdom?”

The answer to the second one comes from the famous American explorers, Lewis and Clark. They named the three rivers in this area after attributes of Thomas Jefferson, the US president who had funded their trip. The locals however took a fairly dim view of rivers called Philosophy, Philanthropy and Wisdom and reverted to Beaverhead, Ruby and Big Hole. The town however kept the name Wisdom.

Be that as it may, I bought the cap. I was very pleased with it even though the assistant tried to point out that a cowboy hat would suit me better.

Nine months later, when I was back in London and my ex and I were still together, he travelled to New York on a Gilbert and Sullivan exchange trip. He asked if he could borrow the cap to wear. I didn’t mind — though it didn’t suit him either. It was on that fateful trip that he met my successor and the marriage was over.

By the time I was compos-mentis enough to ask him if I could have the cap back, he had thrown it away.

Odd how much that hat meant to me. It wasn’t even a reminder of a time when I’d been happy but it meant something even if I couldn’t express what.

I tried several times to contact the shop where I’d bought the cap – searching the web and trying international directory enquiries but drew a blank. But something inside me wouldn’t let go.

The whole Montana thing, tied up with the end of the marriage, haunted me for years. It required lots of re-framing from “total, dismal, miserable failure” to “amazing adventure” but I made it in the end. It became a goal, a quest, a spiritual duty if you like, to recover completely both emotionally and financially so that I could go back to Montana with a clear heart even if it seemed to be for no other reason than that I wanted my Wisdom, Montana cap back!

It took ten years until my heart and soul were cloudless enough to dare to hope that it could be done but the moment there was no pain left, I said, to my husband, Lion, “Can we go to Montana?” and we did just that.

We flew to Seattle and drove across Washington, Oregon and Idaho and into Montana. It was so beautiful… I thought I might cry as we crossed the border to the US state that my ex and I had loved beyond all reason but I was fine; just delighted to be back after a whole decade.

Guess where we headed first? Yep, Wisdom. But would they have the baseball caps? Would the shop even be there? Would I be able to find it in this metropolis that had swelled to 114 people?

Yes, it was there on Main Street (still pretty much the only street) and it was such a rite of passage to return to that great outdoors shop and meander over to the shelf which held a small pile of baseball caps. They weren’t navy blue; they were green, but they had the very same mountain and the word “Wisdom” embroidered so what the heck? I put one on and turned to Lion grinning all over my face.

“It doesn’t suit you,” he said tactfully.

That’s it really. It was a pilgrimage. A rite of passage that was as important to me as climbing Mount Everest or trekking to the South Pole might be for others. I’d done it; full circle.

It wasn’t necessary but it was still terrific when, three days later, Lion turned to me on Bozeman Main Street and said, “Yes, I could live here. I can see why you loved it so much.”

And it was extraordinary to stand on that very street where my heart had felt so broken and filled with fear that I was in physical pain — and feel nothing but contentment.

The Americans call it closure. Sometimes you can get closure in the safety of your own home; sometimes it has to be done with a letter or a phone call. But sometimes it requires an adventure. And the call of that baseball cap was palpable.

You know something? The pilgrimage could never have happened if my ex hadn’t thrown that cap away. If I’d had it back all those years ago when we broke up, it would have gathered dust in a cupboard, loaded with the fears and resentments of a difficult time only to have been thrown out as a pain-filled memento. Instead it became a quest; part of a call to healing and, eventually, a fabulous three-week adventure across the Rockies with someone whom I love and who loves me deeply in return.

Perhaps a hideous final straw, like the casual throwing away of something that meant a lot to you by someone who doesn’t care any more, can be the starting point for a great healing adventure: maybe even the quest of your soul. To know what you want is incredibly important, even if what you want seems silly, like a Montana baseball cap. Behind that silliness will be something important that is calling and yearning and grieving.

Nowadays, I wear the cap out walking with the dogs on sunny days. There’s a regular group of us who cross paths with our dogs on Dartmoor. I’m writing this now because yesterday one of them said with a chuckle, “I like your cap. We could all do with some of that.”

She nodded, “It looks good on you,” she said and, whistling to her dog, walked on.